The Most Impressive Things about Autopilot Cars Feature

Tesla’s Autopilot feature has become the subject of controversy after a Model S crashed into a fire truck on January 22 while possibly using the feature. The National Transportation Safety Board and National Highway Traffic Safety Administration will investigate the incident.

While Tesla’s Autopilot system is not supposed to replace a human driver yet, it can help drivers navigate highways and parking lots, and the company says every vehicle currently being produced in its factory has the hardware for complete, autonomous driving that could be activated when the necessary software and government regulations come into place.

It’s predicted that, in 2050 ( Future Predictions in 2050) autopilot cars will represent 100% of the vehicle fleet in the world . In some surveys, people are worried about the use of these cars. They also fear that their safety will be compromised because drivers are no longer in full control. Furthermore, the AI of this type of car can decide to sacrifice the life of the driver to save other people’s lives.

Here’s what Tesla’s Autopilot feature can do now, and what it might be able to do in the future:

One of the leading causes of traffic jams is selfish behavior among drivers. It has been shown when drivers space out and allow each other to move freely between lanes on the highway, traffic continues to flow smoothly, regardless of the number of cars on the road. In fact, we have the capability of pretty much eliminating traffic jams right now. All we’d have to do is allow three to four car lengths of space between our car and the car in front of us, even in slow-moving traffic. The way we drive now, when traffic gets heavy, if someone needs to change lanes to exit the freeway, or if someone needs to enter the freeway, everybody has to stop to let it happen because we drive packed so tightly together.

And, there’s no other way to say it, we do this out of selfishness. Every time we have ever proffered this theory to a group of drivers, their first response is if we drove that way, everybody would get in front of us. Which, of course is exactly the idea, if we allowed cars to get in front of us and freely change lanes, traffic would continue to flow. When you don’t allow cars to get in front of you traffic has to stop, your frustration level increases, and you become determined to let even fewer cars get in front of you—thus exacerbating the problem. Self-driving cars can be programmed to space out automatically, thereby eliminating the problem.

The 360-degree ultrasonic sonar can read lane lines and recognize other vehicles. It can steer itself while maintaining a safe speed. However, the said software doesn’t work everywhere you go. Rather, it’s designed for freeway driving. For it to work, you need to drive at least 18mph.

3. They can make you a better driver 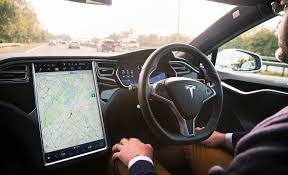 The cars utilize external cameras and radar. They can tell what’s around you. They also come with internal cameras to make you aware of where you’re looking. Although Tesla’s co-pilot system can drive the car itself, it uses data to assist humans in learning how to drive better when they’re in control of the wheel.

Are you expert in parallel parking? If not, you could be, at least with the help of the Tesla’s self-parking feature. In here, the car “parallel” parks for you.
Because the AI is involved in the technology of Tesla autopilot system, parking with the Tesla cars is much easier. Parallel parking or parking in the perpendicular spots are always one of the difficult things to do with the cars. This is where you hit your car with the surrounding things most of the time and scratched the body. But with the Tesla autopilot, your vehicle can park itself like a pro anywhere in which it can accommodate easily. Moreover, it also has this ability to scan for the parking spaces and alert the driver when it available.

5. A radar system helps the car see through fog, heavy rain, dust, or a car in front of it.

Eight surround cameras provide 360 degrees of visibility around the car at up to 250 meters of range. Twelve updated ultrasonic sensors complement this vision, allowing for detection of both hard and soft objects at nearly twice the distance of the prior system. A forward-facing radar with enhanced processing provides additional data about the world on a redundant wavelength that is able to see through heavy rain, fog, dust and even the car ahead.

Hendra Nicholas Follow I am a software engineer, consultant and CEO at 41studio currently living in West Java, Indonesia. My interests range from programming to sport. I am also interested in entrepreneurship, technology, and design.
« Future Technology Predictions in 2050
Top 5 Business Ideas with Amazing Prospect 2018 »